While preparing for the release of EverRise v2.0, we have been putting a great deal of thought into the details of the new contract and upgraded token. We have been working around the clock to ensure a smooth transition between the two versions. Part of that transition is making sure everyone understands the new mechanics in place. One of our core tenets is promoting transparency in the crypto space. We are pleased to release the details for staking with EverRise v2.0.

Staking in v2.0 will be a more active reward process than the passive rewards from reflections in v1.0, so we want to get the information out to the community with enough time for everyone to do their own research and make informed decisions. We strive to create a system that both rewards our most diamond handed holders and offers flexibility for everyone to make a choice that works for them.

Staking with EverRise is a commitment from one holder to other RISE holders that they will not contribute to selling pressure. For this commitment, the staking holder receives rewards commensurate with the time period of that commitment.

Since reflections were removed to help reduce the transaction tax to 6%, staking will be a way for holders to receive more $RISE while holding. With the upgrade to EverRise v2.0, holders will now have the option to stake their holdings to earn a share of the tokens purchased through the automated buyback.

The buyback protocol will be fully automated in v2.0 on all blockchains. In v1.0, the tokens purchased were sent to the burn address but the burn has been removed because of the significant supply consolidation. Instead, tokens purchased by the auto-buyback will be distributed among holders that have chosen to stake their holdings, and staking will act as temporary supply constriction instead of the burn

Each blockchain that $RISE is traded on will have an independent reward pool.

Holders of $RISE v1.0 will be able to stake their v2.0 holdings once they migrate to the new contract. EverBridge will be open to move $RISE to any blockchain so holders can choose exactly where they want to hold and stake their tokens before EverRise v2.0 opens for trading.

Holders will have the flexibility to choose between 12 different time periods ranging from 1 month to 12 months.

It will be up to each individual to decide how long they want to stake their tokens. The longer the staking commitment, the greater portion of the staking reward pool individuals staking will receive.

Holders can stake a portion of their holdings for multiple time periods: these would be separate staking entries. Each entry will be independent. Holders can have multiple staking entries, each one with a custom amount to stake, desired staking periods and started at different times.

The tokens earned from staking can be withdrawn at any time but if left staked, the rewards will compound. 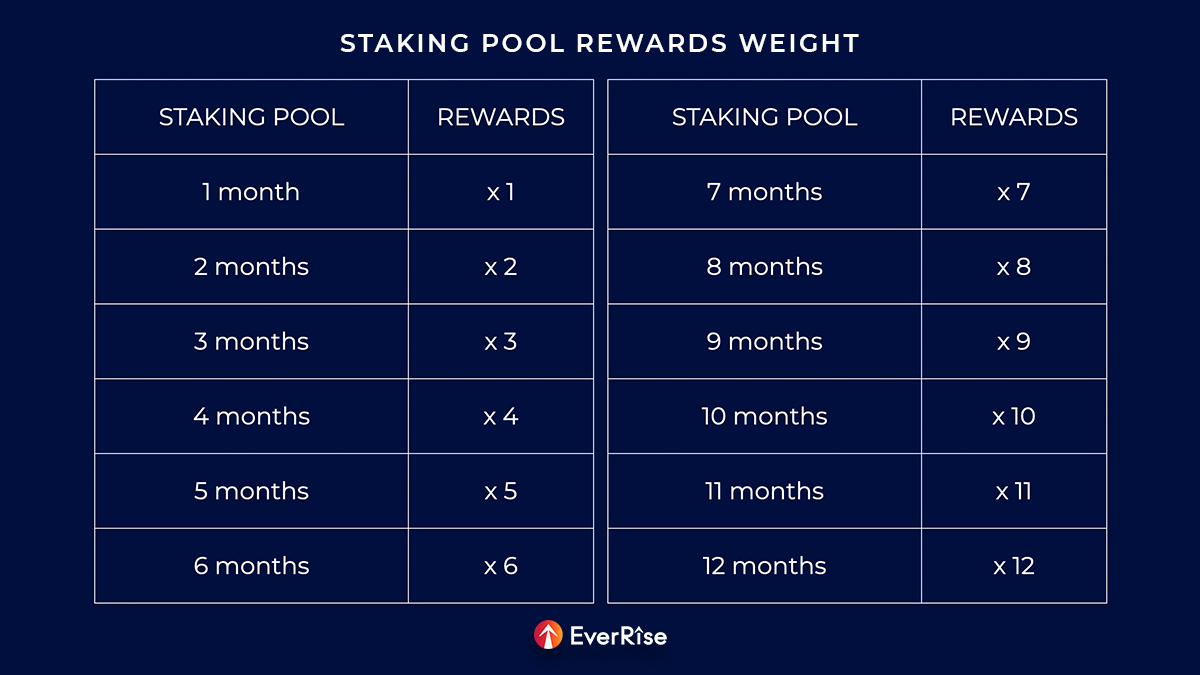 When holders stake their tokens, they will earn rewards proportional to the amount of tokens they have staked, weighted by the length of time they have staked their tokens. Staking for one month will carry a weight of 1x, staking for two months will be weighted 2x, three months 3x, and so on up to twelve months being weighted 12x.

Bob will receive 0.4% and Sally will receive 1.6% of the amount purchased by the Binance Smart Chain auto-buyback during the first 2 months.

Let's say a total of 100,000,000 RISE was bought back on the Binance Smart Chain during those 2 months. Bob's total RISE will be 400,100 RISE. On completion of the 2 months Bob's tokens will remain staked and continue to accrue rewards at the 2 month weight (x 2). Since the initial 2 month staking period has ended, Bob can now withdraw from his 400,100 RISE without a penalty. Whereas Sally's total RISE will be 1,600,800 RISE but she still has 6 months remaining on her staking period.

Note: This example is purely for illustrative purposes as when staking is live there are multiple variables to take into account.

Although deciding to stake is a commitment to lock away tokens for a set period of time, we understand that things happen in people's lives that are unpredictable.

It is important to understand the commitment you make when deciding to lock your tokens in the staking pool. You will need to do your own research to feel comfortable with whatever period of time or on which network you decide to stake your tokens.