Why are we upgrading the EverRise protocol to v2.0?

In our launch of EverBridge, we saw the full potential of having the fastest bridge currently available, literally matching the block speed. With this technology, we could expand into being a fully-fledged blockchain infrastructure protocol. EverRise v2.0 will allow us to expand to any blockchain platform we want while also giving us the opportunity to make EverBridge the industry standard for transfers across all chains. As part of that effort, we want to create balanced liquidity pools to allow us to launch on multiple chains while protecting RISE holders.

Which is the new added utility for RISE token?

In addition to powering our ecosystem of dApps, RISE will also serve as the utility token for doing swaps and transfers on EverBridge.

Is EverRise v2 a new token?

No, it is the same token (RISE) but on an upgraded protocol.

Will EverRise v2 be available simultaneously in all 4 blockchains (ETH, BSC, POLY and AVAX)?

It will be available simultaneously on ETH, BSC and POLY, and the plan is to add AVAX at the same time or at a later date.

Will the contracts on EverRise V2 have different addresses?

Yes, there will be a new address for every blockchain we will be launching on.

Should this be considered a relaunch?

The concept “relaunch” is usually understood to be a “launching of a previously launched token without significant contract changes”. That is not our case, as we are implementing very significant changes that will take the EverRise protocol to a completely new sphere. This will involve upgrading our protocol to EverRise v2.0, and the integration of new blockchains into the EverRise system. In a sense, this is far more extensive a project than a simple relaunch.

What is the process to transfer the tokens to the upgraded protocol?

Current RISE holders do not need to sell their tokens in order to get the upgraded tokens. Instead, we will be releasing a new dApp concurrently with our v2 launch that will allow RISE holders to swap their old RISE tokens for the updated v2 tokens. The advantage of this is to avoid a rush of holders selling and buying tokens that could cause some holders to lose out if they are not online or actively monitoring our communication channels. We will work to ensure the process is fair and well-organized.

How long will it take to transfer the tokens to the upgraded protocol?

There will be a fixed period of time in which current RISE holders will be able to swap their v1 RISE tokens for the v2 RISE tokens. We are planning to do it in one week, but we will confirm this when the date is closer. After that week, we will stop the trading on the old token contract and start the trading on all the upgraded token contracts on all the chains simultaneously. Holders who hold the v1 RISE token after that date will still be able to swap their tokens to the new protocol at the same proportion as everyone else - even though trading will have stopped on v1.

What will happen to people that aren't active and don't hear about the upgrade?

They will have the option to swap whenever they want after we have upgraded to v2. Whatever tokens they hold on the v1 they will receive the corresponding v2 tokens.

If liquidity is locked how will you migrate it to the new contracts on all the chains?

When we do the swap for migration, and after trading has stopped, the v1 tokens that are provided to EverRise will be sold into the liquidity pool so we can utilize as much of our existing liquidity as possible prior to unlocking it completely next summer.

What will happen to the money in the v1 buyback wallet?

What will happen to the old RISE after migration?

Once we launch the v2 contract, trading will be stopped on the old RISE contract. According to our current timeline, a week before v2 launch we will allow RISE v1 holders to begin swapping for v2. They may continue to swap v1 tokens to v2 even after trading has stopped. We will be taking out any remaining liquidity when it unlocks on June 16th, 2022. After June 16th, 2022, all liquidity will be removed and there will be no trading on EverRise v1.

Will there be a presale for people who are new to RISE?

This has not yet been decided, but if we decide to do a presale, we will be expediting the development of EverLaunch to serve as our pre-sale platform for the v2 tokens.

Will we need to get listed again at CMC; CoinGecko, etc?

No, we only need to give them the notice we are upgrading the contract and they will just update the data on their platforms.

What does it mean to consolidate the total supply to 100B RISE?

Update: Burn tokens are burnt forever, so we will go with 72 billion instead of 100 billion for V2. 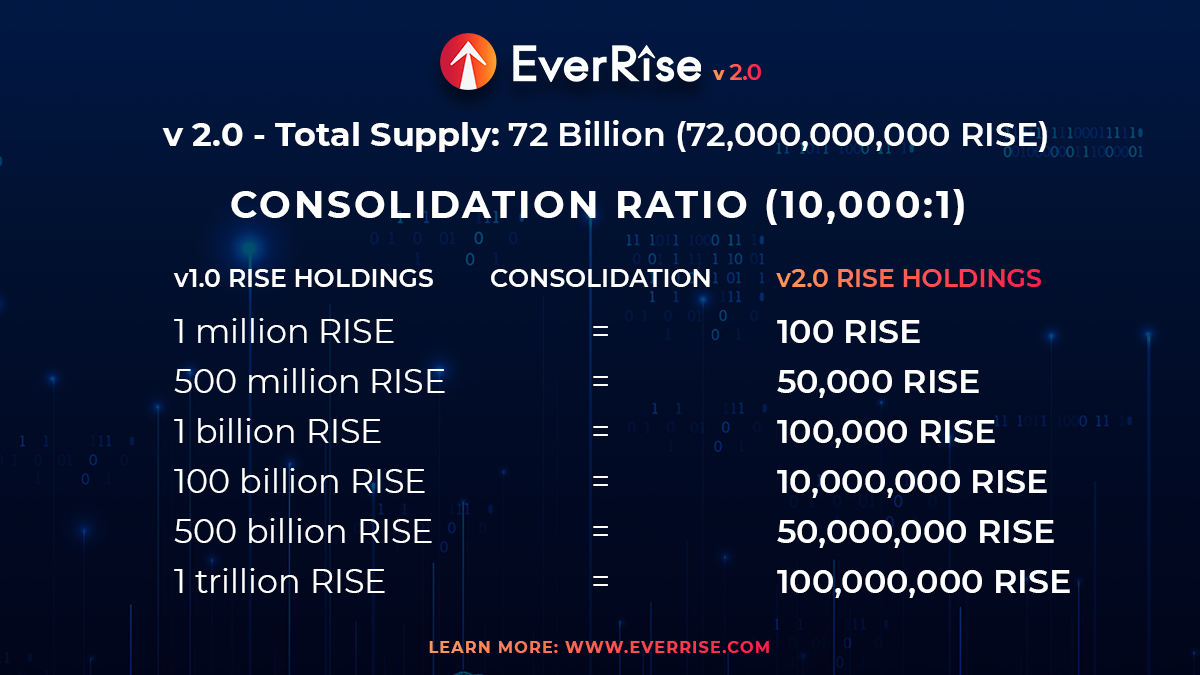 What is the benefit of consolidating the supply?

Over the course of our operations, we have found that a circulating supply of 1 quadrillion tokens is not necessary to achieve the kind of gradation we want in being able to tailor our RISE holding requirements to each product and client type. We have discussed this for a long time now, and decided to take the opportunity of this protocol upgrade to consolidate supply in an effort to avoid the false meme-coin impression that larger supplies sometimes create.

So, will we have fewer tokens in our wallet?

If holders choose to swap their current RISE tokens (v1) for the upgraded RISE tokens (v2), they will have fewer tokens as the total circulating supply of the upgraded token will be 100B instead of 1 Quadrillion. However, the v2 tokens, while less in quantity, will hold the same value as the v1 tokens. In a nutshell, you will have fewer tokens but the value in fiat currency of your RISE holdings will be the same.

Will removing burn make it harder to hit $1?

Our main concern in the burn function, as we move to a new multi-chain protocol with the fastest bridge technology available, is that the constant changes in circulating supply across multiple chains can interfere with the system we are building. Instead, the supply constraints that have an upward effect on the price will be replaced by our novel staking function which utilizes our revolutionary buy-back code. Technically, of course, the drastic reduction in supply will make it easier for an individual token to reach $1 (or any other imaginary price goal).

What happens to the current burned tokens on the new contract? Will that supply be burned?

Those are the tokens that we will utilize for the liquidity on the other network. EverRise v2 will not have a burn mechanism.

If we don't burn the tokens, where will the tokens that the Kraken buys go?

With the updated buyback protocol replaces the burn with staking, the tokens that are bought back are redistributed to those who are staking when the buyback occurs.

What is the benefit of changing the reflections and burn mechanisms for staking?

This approach benefits the long term holders as opposed to day traders, because only stakers will earn RISE from the tokens that are bought back. Those wishing to keep their tokens available in the open market for dApp and bridge users who need RISE tokens to use EverRise products will of course still benefit from the rising price caused by the constrained supply that staking creates.

How much will I earn by staking my tokens? Will we get more for staking for longer?

We are still fleshing out the staking protocol and will release more details on this in the coming weeks.

When will we be able to start using the EverRise Staking and EverBridge on the upgraded protocol?

Holders who choose to transfer their tokens to the upgraded protocol will be able to sign up for staking on the the EverRise Staking dapp prior to v2 launch. Holders will be able to utilize EverBridge upon the upgrade to go cross-chain.

Which is the new tax breakdown?

4% buyback and 2% marketing across all chains.

We are lowering the buyback tax by 2%, the marketing tax by 1% and removing the 2% rewarders tax.

If you lower taxes won't there be less for Kraken and holders staking?

We believe that the new tokenomics model is one that is necessary for the growth of the project and opens up a lot more opportunities for partnerships. We will also still be driving revenue to the buyback reserves (Krakens) via the dApps.

Cardano, Solana and Polkadot, among many other blockchains, have different coding languages than Ethereum, BSC, Polygon or Avalanche. This means that bridging to those blockchains is a more complex task. This is something we will be working on as our goal is to successfully bridge to all major blockchains.